A Human Infection Study is a carefully managed medical research study, during which volunteers are intentionally given an infection in a safe way with healthcare support.

Doctors ask volunteers to join these studies because involving people is sometimes the only way to understand diseases, and find new ways to prevent and treat them. They can very useful for giving researchers ideas for developing new vaccines, and quickly finding out if a potential vaccine has promise.

There are strict guidelines in place to protect the safety of people taking part in human infection studies. For example, people cannot be exposed to dangerous infections, like ebola, or infections that can't be cleared up during the study (preferably with treatment).

To make sure that human infection studies are safe and ethically acceptable, a detailed plan of each study is reviewed independently. This includes needing approval by an ethics review committee, consisting of experts and members of the public. The committee makes sure that all steps have been taken to keep participants as safe as possible.

Read more about the history of human infection studies, and how a modern-day study is run, on our blog.

The eradication of smallpox 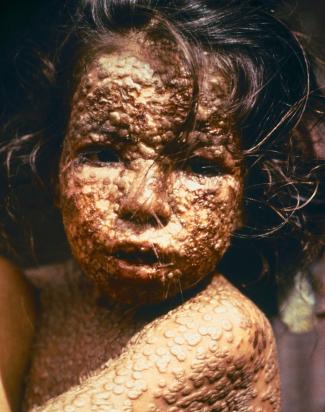 In the 20th century more than 300 million lives were thought to be lost to smallpox. It was highly contagious and if you were unlucky enough to catch it, only 2 out 3 people survived.

Those who survived, albeit blighted by scars and blindness, were immune to smallpox for the rest of their lives. As early as the 17th century, doctors began experimenting with how to pass this immunity to people who hadn't been infected with smallpox.

A doctor called Edward Jenner noticed that milkmaids who had sores on their hands from coxpox (the cow version of smallpox) were also immune to smallpox. His idea was that infecting people with a small dose of cowpox might give them immunity to smallpox too.

He tested his idea on his gardener's son, Phipps. Young Phipps was given an injection of puss from a coxpox sore, and once recovered from a mild illness, Jenner exposed Phipps over and over to smallpox. Luckily for Phipps, Jenner's experiment had worked and he didn't catch smallpox.

While this study would not be allowed today, it shows how powerful human infection studies can be. Jenner's experiment, purposefully exposing Phipps to smallpox to demonstrate that a cowpox injection protected him, was the first step towards the world's first global vaccination programme, and the eradication of one of the world's deadliest diseases.